It’s summertime and the living is easy – or it’s supposed to be. Exotic vacations, lazy afternoons, and stuffed beach bags are now a reality and the opportunity to get lost in a juicy tome is here at last. Many of this summer’s blockbuster books will also be Hollywood’s next big hits, books like the “Girl with the Dragon Tattoo,” and “127 Hours.” You see, the publishing and film industries are inherently intertwined. Both enter the market with the same intention: to transport us into an alternate reality.

The seductive dance that takes place between the two sectors determines the stories that will entertain our lives and fill our imaginations. In fact, they both follow similar release schedules. Potential blockbusters are released over the summer holiday period while smaller works are reserved for the spring and autumn. Many great Irish written novels, short stories and plays have been made into films. They include “The Quiet Man,” “Ulysses,” and “My Fair Lady” usually come to mind. Today, contemporary Irish and Irish American authors are playing the Hollywood game too – and winning big. Just look at Nora Roberts, Mary Higgins Clarke, Roddy Doyle, and Mauve Binchy. Between them, they have over 30 properties adapted for the screen and TV. And they are just the tip of the iceberg.

Adapting books for the screen is an intricate process. Even with a big budget and celebrity power there is no guarantee it will be a hit. Over and over again, fans excited to see their favorite story brought to life leave the theatre disappointed, blasting the director for failing to capture what their imagination created. The movie or TV version is usually condensed and is a selective interpretation of the book. Characters are often aged up or down, sometimes removed, and locations and time periods are changed.

I had the opportunity to work on the adaptation of popular book series “Nate the Great,” for TV and we took a lot of creative license. Our Nate was older, a little cooler. He had a new “Hispanic” buddy and more. And, as with many book adaptations, the scripts woefully ended up in a drawer with Nate still waiting to make his big screen debut. However, the process still fascinates me and that’s why this fall, the Irish Business Organization will present a symposium to explore the art and business of adapting a novel for the screen. Through a series of case studies, members of the creative team will reveal how to option a book, form creative and legal partnerships, and discuss the complex nature of film financing.

In the interim, here are some exciting Irish-centric projects to look forward to. Director JJ Abrams (“Super 8″) optioned the rights to adapt Colum McCann’s novel “Let The Great World Spin.” The book is a period piece about various characters struggling through 1970s New York. Abrams will produce the film, with McCann writing the screenplay. Neil Jordan has signed up to write and direct the film adaptation of Neil Gaiman’s The Graveyard book.

Gaiman’s best-selling book follows a young boy named Nobody whose parents are killed and is raised by ghosts in a graveyard. Actress Charlize Theron has been lined up to play the lead role in a film version of Sebastian Barry’s novel, “The Secret Scripture,” to be produced by Noel Pearson. Emma Donohue, meanwhile, recently wrote the screenplay for her best-seller, “Room.” Last week, actor Brendan Gleeson secured funding to make a film of Flann O’Brien masterpiece “At Swim-Two-Birds.” Actor, Gabriel Byrne has been linked to the film along with Colin Farrell and Cillian Murphy. Constantin Film, the German production and film comnpany best known for the successful “Resident Evil” franchise, is going the romantic drama route, optioning the film rights to “Where Rainbows End,” a novel by author Cecelia Ahern. 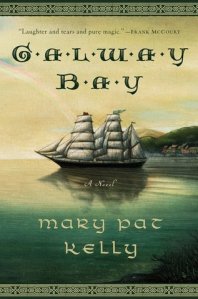 Locally, fellow Irish American Writers and Artists member, Mary Pat Kelly’s epic saga, “Galway Bay” (now in paperback) has been optioned and is being developed for television by Jean Doumanian.

I wish them all luck throughout this exciting and intricate process. Enjoy your summer reading and stay tuned for more details on the symposium.

This article previously appeared in the Irish Echo.