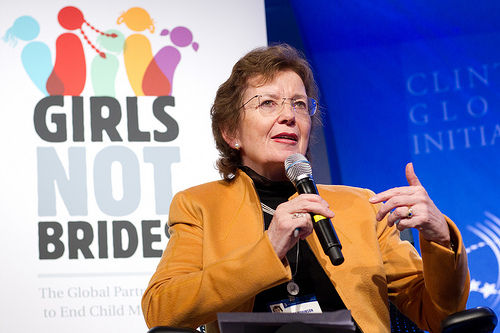 September in New York is known for Fashion Week, Yankees baseball, 9/11 Memorials, the General Assembly at the UN and increasingly, the Clinton Global Initiative (CGI). CGI  is the ultimate power gathering of the minds – progressive CEO’s, heads of states, artists, and NGO’S  coming together  from around the globe to tackle serious  problems. This year’s CGI focused on jobs creation, sustainable consumption and empowering women and girls.

The annual meeting was kicked off with Secretary Hillary Clinton urging the US to join a treaty on women’s rights and a special session on disaster preparedness.  The focus quickly switched to jobs, jobs, and jobs. Generating employment in the midst of the most prolonged economic slowdown in decades is a worldwide problem — and in the developing world, a legal job can make the difference between life and death.

Wednesday’s highlights included a satellite interview with humanitarian leader, Aung San Suu Kyi of Burma, and Archbishop Desmond M. Tutu – hosted by Charlie Rose.  Archbishop Tutu spoke about the launch of “Girls Not Brides“, a new global partnership launched by The Elders to end the harmful practice of child marriage.  Aung San Suu Kyi, spoke about freedom and stated that while many people think democracy is a western concept, the concept of freedom and security resonates with people across the world. “We all want to be free, have the freedom to search and build up our own passions,” “she stated.  Later President Obama, fresh from this speech at the UN General Assembly greeted the group –calling the room“do-gooders” and “Bill Clinton is the ultimate “do-gooder.”  He presented his jobs creation proposal and spoke about sustainable consumption.

Thursday’s notable speakers included Chelsea Clinton and actress Geena Davis discussing technology for economic empowerment.  Several commitments were announced and one that got a lot of traction dealt with efforts to end modern day slavery.

It is estimated that there are over 27 million people enslaved in the world – toiling away in factories, sweatshops and in the sex trade against their will. The Slavery Footprint Campaign launch http://slaveryfootprint.org/ coincided with the 149th Anniversary of the Emancipation Proclamation and aims to start a consumer driven movement to eradicate forced labor. With the tag line “How many slaves work for you?” the new website and app will revel to the user just how many slaves work to make your smart phone, laptop, and more available. The supply chain –human trafficking – the truth will get exposed. When I tried to get on the website that evening –I could not. The traffic was so high; the site had to move to a larger server. MTVU will be a partner and launched their own initiative – the “mtvU Against Our Will Campaign” that will shed light on the America’s role in this global epidemic.

Concluding the 2011 Annual Meeting, Secretary of State Hillary Rodham Clinton along with Chef José Andrés, announced a progress report on the Clean Cookstoves commitment first announced at the 2010.  Exposure to smoke from traditional cookstoves –the primary means of cooking and heating for nearly three billion people in the developing world – causes nearly two million premature deaths annually. The Global Alliance for Clean Cookstoves, with the goal of enabling 100 million households to adopt clean, efficient cookstoves by the year 2020 has raised more than $85 million to date.

Hillary was later joined on stage by her daughter Chelsea Clinton for a conversation on the role of government, the impact of the Arab Spring and democracy, and how to manage resources with population soon to reach 7 billion.

In his closing remarks, President Clinton said he was optimistic and urged people to participate more to change the status quo. Commenting on surveys that say young people are pessimistic about the future, he said it was important to understand that the choices we make now shape what the world will look like. “Nobody has a right to a life free of challenges — everybody is called upon at some time or another to re-imagine all the premises of their lives…  of their nation and to create a whole different future,” “You should be grateful that you’re living in a time when you’ve been given a chance to build a new world,” he said. “The uncertainties of the moment don’t have to exist 10 years from now.”

Established in 2005 by President Bill Clinton, the Clinton Global Initiative (CGI) has brought together nearly 150 current and former heads of state, 18 Nobel Prize laureates, CEOs, major philanthropists, and NGO’s. These CGI members have made more than 2,100 commitments, impacting the lives of nearly 400 million people in more than 180 countries.