By Maura Kelly  (This article first appeared in the Irish Echo)

Mayor Bloomberg has stated many times that small businesses are the chief engine of growth in New York City. However convincing entrepreneurs that his Department of Small Business Services isn’t another “bullying” bureaucracy is still a challenge. A challenge that its Commissioner, Robert Walsh has tackled for the past nine years.  In his role, Walsh visits neighborhoods in the five boroughs, and hears frustrated tales of red tape and delays; and knows that when someone is thinking of opening a small business the last place they think of is the government.  As Small Business Services Commissioner, it’s his job to show them that this is a major mistake.

I met up with Commissioner Walsh recently at an Irish Business Organization (IBO) event when he presented his agency’s new initiatives to members.  Walsh has a special relationship with the IBO due in part to President, Niall O’Leary who taught Walsh’s daughter the finer points of Irish dancing at the Niall O’Leary School of Irish Dance. 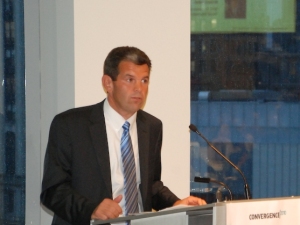 “From Sunnyside to Chelsea, Red Hook to the South Bronx —entrepreneurs are an integral part of the city’s recovery,” said Walsh. “The city’s 200,000 small businesses are a fundamental sector of New York’s economy and my mission is to help more start-up and grow.”  Still after years in operation, many aspiring business owners in the room were hearing about his Agency for the first time.

Working with a $128 million budget for 2012 and a staff of 250, Walsh has created business counseling offices in every borough.  Called Business Solutions Centers, they are at the forefront of the Agency’s effort to provide direct assistance to business owners.  According to Walsh, the agency will work with you to if you have a new business idea or if you have been in business for years. They will help you develop a business plan, secure financing, and access City benefits and much more. Overall, they try to cut the red tape for you by being your liaison when you need to resolve issues with other City agencies.  Walsh agrees that launching a business in this uncertain economy is not for the faint hearted, and yet many NYC entrepreneurs are taking the plunge.

A key service that was of interest to IBO members was the array of business courses offered called the FactTrac programs. Through a partnership with the Kauffman Foundation and SUNY’s Levin Institute, over 1,000 aspiring and existing New York entrepreneurs have taken advantage of the hands-on intensive business courses.  The courses are taught primarily in English, with some available in Spanish and a few in Mandarin and Russian.

Another new service that surprised many was assistance with loans procurement. Walsh explained the city works with nonprofit entities such as the Kaufman Foundation and for-profit entities such as Citibank, to fund some of its Business Solutions programs. “The problem for many people is access to capital, so Business Solutions has been created as “a proactive, not a reactive program”, he said. Walsh said these entities have been helpful steering loan applicants it has turned down to other loan sources that might accommodate them. In addition, he said that 20 law firms have done pro bono work for SBS.

In addition, this year the city is aiming to help 40,000 New Yorkers find work through its expanded network of job centers.  A number of IBO members have had success with the SBS Agency and can vouch that the courses and business plan preparation has helped them progress business matters.

Walsh realizes his agency might have a PR problem but overall, he wants Irish business owners to succeed and know that the city government is there to propel their entrepreneurial ambitions. He invites the public to review the website nyc.gov/sbs and call his office.  Many US cities have similar agencies and services but you really have to do seek them out.

Robert Walsh is proud of his Irish roots and grew up in Bensonhurst, Brooklyn, the fifth of seven children. He has a master’s in public administration from Fordham University and a track record in business development.  He was a keynote speaker at the Irish Echo Small Business Awards earlier this year.