Described by Time magazine as the “apotheosis of philanthrocapitalism” CGI is an ultimate power gathering of the minds. For three days, progressive CEOs, heads of states, and NGOs mingle and tackle severe global problems. This year’s theme, “Designing for Impact,” focused on the capacity of global citizens to create an environment where their lives and the systems they use can serve as an effective vehicle for change. Through this theme, participants explored how innovation and creativity can transform into platforms for global action.

CGI was and is created to promote collaboration and members are encouraged to create “Commitments to Action.” These commitments are action plans that are specific, and measurable. Over the three days, Clinton happily announced over 150 new commitments valued at more than 2 billion dollars. From improving the monitoring and warning of severe weather in Haiti to sending medical personnel to Rwanda for health programs to addressing the problem of under-nutrition in Guatemala, the new projects aim to improve the lives of millions of people around the world.

“I am convinced that cooperation, not conflict, will define this century,” said President Clinton. “From the capitols of the world to the most remote villages, people everywhere understand that there are universal challenges which face us all and are beyond the power of any individual to solve alone. 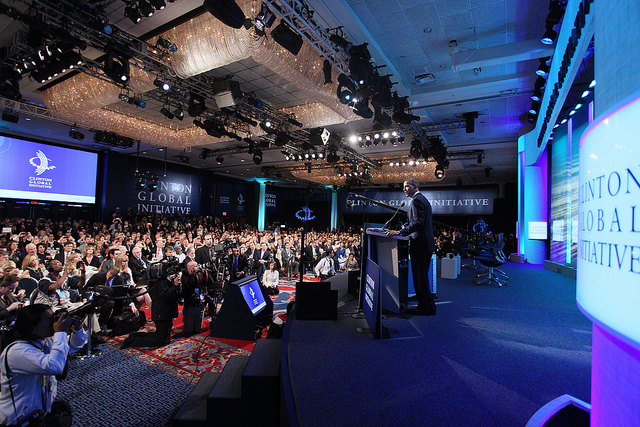 On day three, President Obama used his speech to speak out passionately against modern day slavery. “Our fight against human trafficking is one of the great human rights causes of our time” The President acknowledged that human trafficking is a major problem in the United States, particularly in the immigrant communities. “I’ve made it clear that the United States will be a leader in this global movement against trafficking,” Obama said. “Nations must speak with one voice – that our people and our children are not for sale.” President Clinton echoed this message and urged participants to support the NGO’s who shoulder the heavy burden of helping the millions of victims.

Later that day in a series of one on one interviews, TV show host Piers Morgan joked with Bill Clinton that the people of Britain would love to have him as their Prime Minister.  In response, Clinton said: ‘There are only two countries I’m eligible to run for the leadership position. If I move to Ireland and buy a house I could run for president of Ireland because of my Irish heritage. And because I was born in Arkansas, which is part of the Louisiana purchase any person anywhere in the world that was born in a place that ever was part of the French empire, if you live in France for six months and speak French, you can run for president.”

Perhaps, in this revealing talk, Bill is starting to think about life after CGI. If this was ever the case, I think the Irish people who have a strong affinity to Bill Clinton would support his nomination whole heartily. However, according to the Irish Constitution, he must first get his Irish citizenship papers in order.

Eight years in the making, CGI continues to grow in strength. “I think more and more people are drawn to the idea of coming together to take action. Companies increasingly understand that social responsibility is part and parcel of what makes a market leader in the 21st century, and that makes our Annual Meeting a must attend forum for top CEOs,” remarked Clinton.