It was just after midnight on Thanksgiving when we arrived at PRONOEI Santa Clara de Asís in Huaycan, a suburb of Lima. PRONOEI’s are early-primary schools for slum children sprinkled throughout Peru. My traveling companion and I were there to assess the school and its education programs on behalf of funder, Helping Other People or HOPe. We also  went to meet and understand the needs of the migrant people living in the sprawling shantytown on the edge of Lima. Sr Rosa, a Peruvian Franciscan nun whom I met previously in the Bronx, New York was our host. Throughout our stay we met fragile slum children like 3 yr old Bernard, and 5 yr old Marisol devouring their ABC’s and healthy breakfasts; and enjoying their safe play space. We dined with young postulants exploring religious life and met mothers and fathers struggling daily to exist in a dusty settlement at the foot of the Andes.

The settlement goes back to the 1980’s when mountain people fleeing political violence and economic devastation in the high Andes descended on the fringe of Lima. Shantytowns like Huaycan popped up as poor people squatted on the land, then organized to scrape out a living. Today, over 180,000 inhabitants live in this barren, hilly suburb. Generally, a dwelling is a combination of bricks stacked neatly together covered with a corrugated tin sheet roof.  The poorer the family, the further up the mountain they live where the huts and conditions are more dire. However organized these shantytowns are, they are also melting pots of culture, politics and violence mixing in haphazard ways. Their size overwhelms local and national governments making the services that Sr Rosa and HOPe provides a necessity.

Although we were in the middle of sprawling slum, Sr Rosa’s three story red brick building had hot water, a refrigerator, and a computer with an Internet connection – mostly funded by HOPe. Sr Rosa lives here with another nun who is a psychologist and two postulants who teach classes and mother the children. PRONOEI Santa Clara de Asís’ main focus is to support local children through education and nutrition and serves over 100 families daily. Because the need is so immense, Sr Rosa only helps the poorest of the poor, like Bernard and Marisol who live with a single mother. Many of the children suffer from TB, malnutrition and other health aliments associated with extreme poverty. Five days a week starting at 8am, the Pronoei offers early learning classes for children 2-5yrs. Many of the preschoolers wear checkered uniforms provided by Sr Rosa that are kept in pristine condition. A typical morning starts with the children in a semi-circle doing mediation while soft Enya like music plays in the background. The children chant affirmations like, “I am intelligent,” “I am loved” and “I am love.” They do art therapy and draw personal pictures of their family and home. Images of contentment, safety or chaos quickly emerge from the drawings. The resident therapist will later interpret the artwork and discuss it with the children and parents, if need be. In the afternoon, older children use the center as a safe place for homework help, and mothers arrive in the evening for workshops on health and to learn about the importance of education. 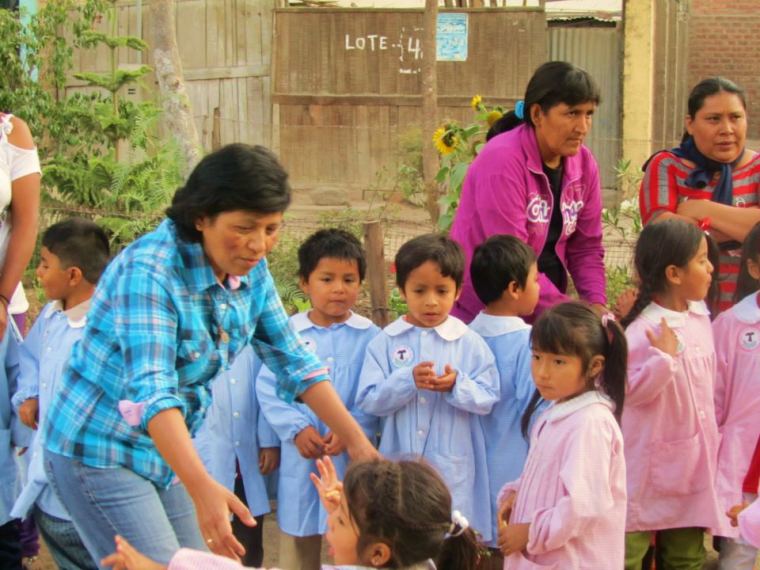 In addition to HOPe’s grants, the 49yr old nun works two jobs to keep the doors open. Coming from a middle class family in Lima, Sr Rosa speaks five languages (English, Italian, French, Portuguese and Spanish) so she can provide languages translation services. Occasionally, she gets requests to coordinate conferences. Her congregation, Mothers of the Holy Cross which originated in Tanzania offers moral support and some financial assistance as well.

Throughout the developing world, urbanization has created shantytowns that circle major cities for miles on end. Extreme poverty is the norm and opportunities are ripe to corrupt young minds. Thankfully, Sr Rosa has no desire to slow down and is looking to expand. While there, we toured a rocky plot nearby where she plans to build another house. This one will have a community kitchen where malnourished children will get healthy food daily and where mothers will come and learn cooking and a trade. The plot is owned by the community and the locals have agreed to hand the deed over to Sr Rosa’s Franciscan order.

The streets may have no names but Sr Rosa and her teachers know all the children’s names and the names of their parents up and down the hills of Huaycan. Together they are working hard to better their situations and pull themselves out of poverty – and HOPe is honored to be involved.

HOPe – Helping Other People was founded by members of the Kerry Association in Yonkers over ten years ago. HOPe is a non-denominational humanitarian agency that helps the poor transcend poverty. HOPe is always looking for volunteers and for more information visit www.hope-charity.org.

This article was previously in the Huffington Post and the Irish Echo.